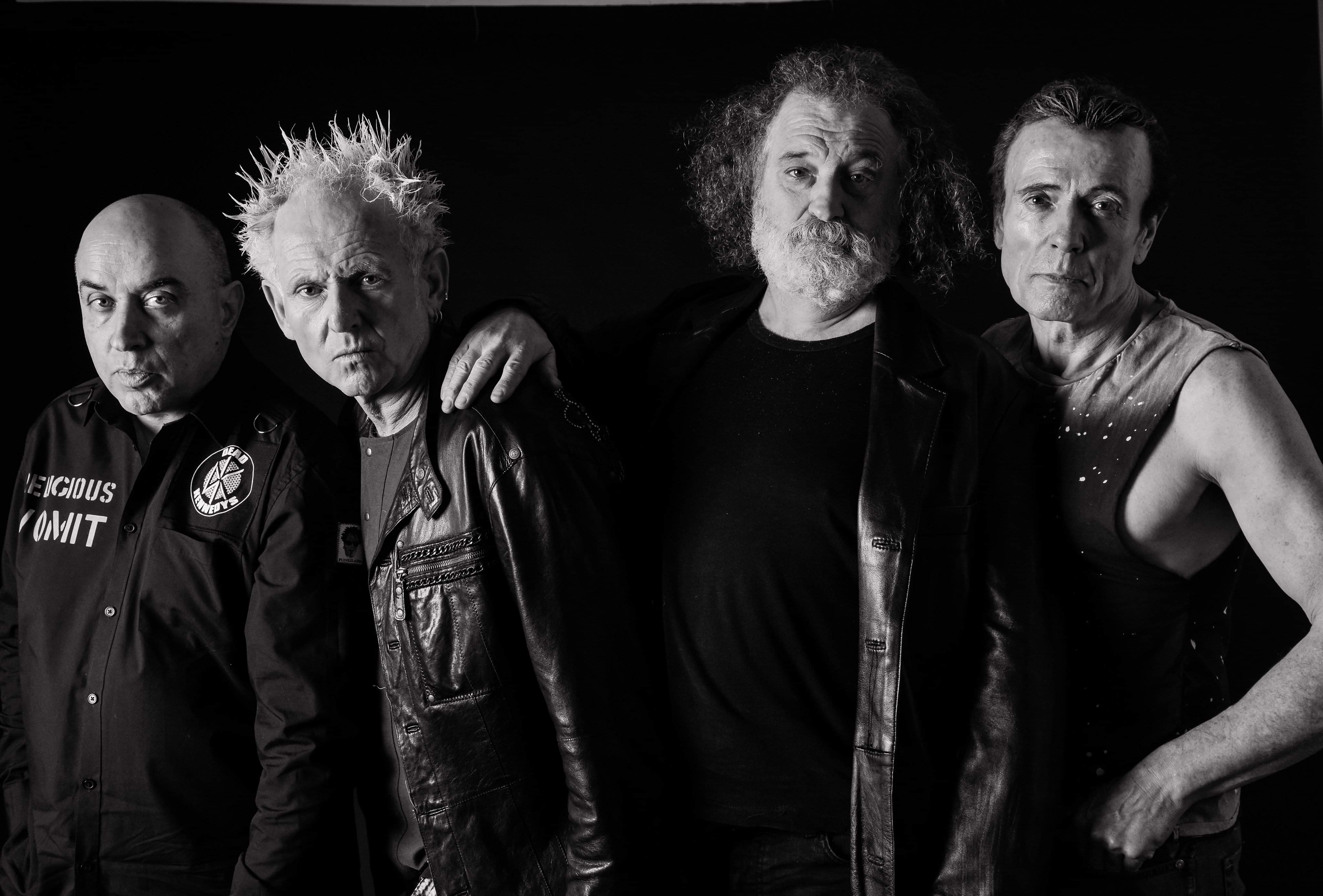 The Outcasts : Martin Cowan and Colin Getgood (better known as Getty) on guitar, Colin Cowan on drums and Greg Cowan on bass and vocals formed in Belfast in January of 1977 and played their debut gig in August of the same year. Due to a severe lack of venues in Belfast for punk bands, The Outcasts were forced to hire nightclubs to use for private parties, and then playing before the management knew what was happening. Dubbed 'The band you love to hate' by the local press due to their bad boy image and loutish behaviour, the band began to attract their own local following and even managed to make the front page of local news paper the News Letter in January 1978 when their gig at the Pound was attended by a journalist keen to report on the new youth movement emerging in Belfast.

The Outcasts cut their first demo at Wizzard Studios in early 1978 and the resulting demo attracted attention from the recently formed Portadown based label IT Records. March 1978 saw their debut three track 7" single released on the label. After continuous gigging at the Harp Bar the band built up a loyal fanatical following and they soon joined forces with Terri Hooley of Good Vibrations Records and Justa Nother Teenage Rebel was released as the third Good Vibes single in the summer of 1978 with Terri becoming the band’s manager around this time too. The Outcasts continued to cause mayhem on the local gig circuit before going into the studio to record a track The Cops Are Coming, which was to appear on the double 7" compilation The Battle Of The Bands EP, again on the Good Vibes label.

A debut album Self Conscious Over You was released in 1979 again on the Good Vibrations label in the UK and it was also released in France on Blitz - Krieg Records to much critical acclaim. However, on the eve of the album’s release Greg was involved in a car crash which put him in hospital for twelve weeks. The album and a single of the same name came out when he was in traction. Upon Greg’s release from Hospital, Gordy Blair joined the band on bass until Greg had fully recovered and was in a position to play bass and sing again.

The Outcasts final Good Vibrations related release came in the shape of the Room To Move EP, a compilation 7" to which The Outcasts contributed the track Cyborg. Energy Records released this EP in conjunction with Good Vibrations. Back in Belfast however the band were dropped from the Good Vibrations label but local film maker John T Davis made a documentary on the band called Self Conscious Over You. The movie featured footage of The Outcasts performing at an Ulster Hall gig introduced by John Peel. The film was a follow up to Davis’s highly acclaimed and award winning ‘Shellshock Rock’ movie. The Outcasts film even received a screening on BBC N. Ireland Television.

The band’s next single was Magnum Force. It featured Gordy Blair playing bass on the ‘b’ side only and also marked the debut of second drummer Raymond Falls (then only 16 and still at school). The single was released on the band’s own GBH Records. Ross Graham, who had been brought in by the band to produce the single, took over as their manager. They had first met Ross during the filming of ‘Shellshock Rock’.

As a five-piece they toured France and England regularly. The Outcasts recorded a four track session for the John Peel Show on BBC Radio 1 which was broadcast on May 25th 1981. The band then set up their own Outcasts Only label in mid 1981 and released the four-track Programme Love EP, the only blip being Getty being hospitalised after a fight with London skinheads and the band having to do some live shows without him. The highlight of this period for the band was their appearance at the 'Christmas On Earth' festival in Leeds.

The band followed their extensive gigging with the release of another 7" single, this time the live favourite and Glitter Band cover Angel Face. Sadly this was the last Outcasts record to feature Colin, who was killed on Thursday 13th May 1982 in a car accident, just shortly before the single was released.

The band’s second album Blood And Thunder was released by Abstract Records in 1982 (and by New Rose in France) and on September 25th 1982 they recorded their second, and final, session for the John Peel Show. The Outcasts also recorded a clutch of sessions for the local Downtown Radio as well as two sessions for Dave Fanning on RTE, and two for the Janice Long show on BBC Radio One. The band also made a promo video for the track Winter.

In 1983 Abstract Records released the single Nowhere Left To Run on both 7" and 12" format. This single was issued later in the same year by Anagram Records in the UK and also by New Rose in France. In early 1984 New Rose in France also released Seven Deadly Sins both as a 7” single and a mini album. 1985 saw the band make their last appearance on vinyl when New Rose released their version of the old Stooges classic 1969 on both 7" and 12”. Shortly after it’s release Raymond Falls left to join the army and the Outcasts were no more. Greg, Martin, and Getty continued to play under the name Time To Pray for a short while.

Today the band are fondly remembered by many, and still have a large cult following in France where they toured regularly in the 1980’s. The Outcasts had no pretensions. They had no intention of seeking fame and fortune in the bright lights of London. N. Ireland was their home and this is where they kept their base.

To celebrate his 50th birthday Greg Cowan played a handful of songs to invited guests with his brother Martin and Raymond Falls at the Black Box in Belfast in June 2010. This was the first time that the three members of the Outcasts had been on the same stage since their split in the mid 80s. They were ably assisted on the night by Petesy Burns on bass and Brian Young on guitar. This “gig” ignited the idea of reforming the Outcasts and when they were offered a prime slot at the Rebellion PuNk Festival in Blackpool the following year, it was an offer which they couldn’t refuse. To date the band has played two sell-out shows in Northern Ireland and the Rebellion PuNk festival in Blackpool. Further gigs will surely follow!