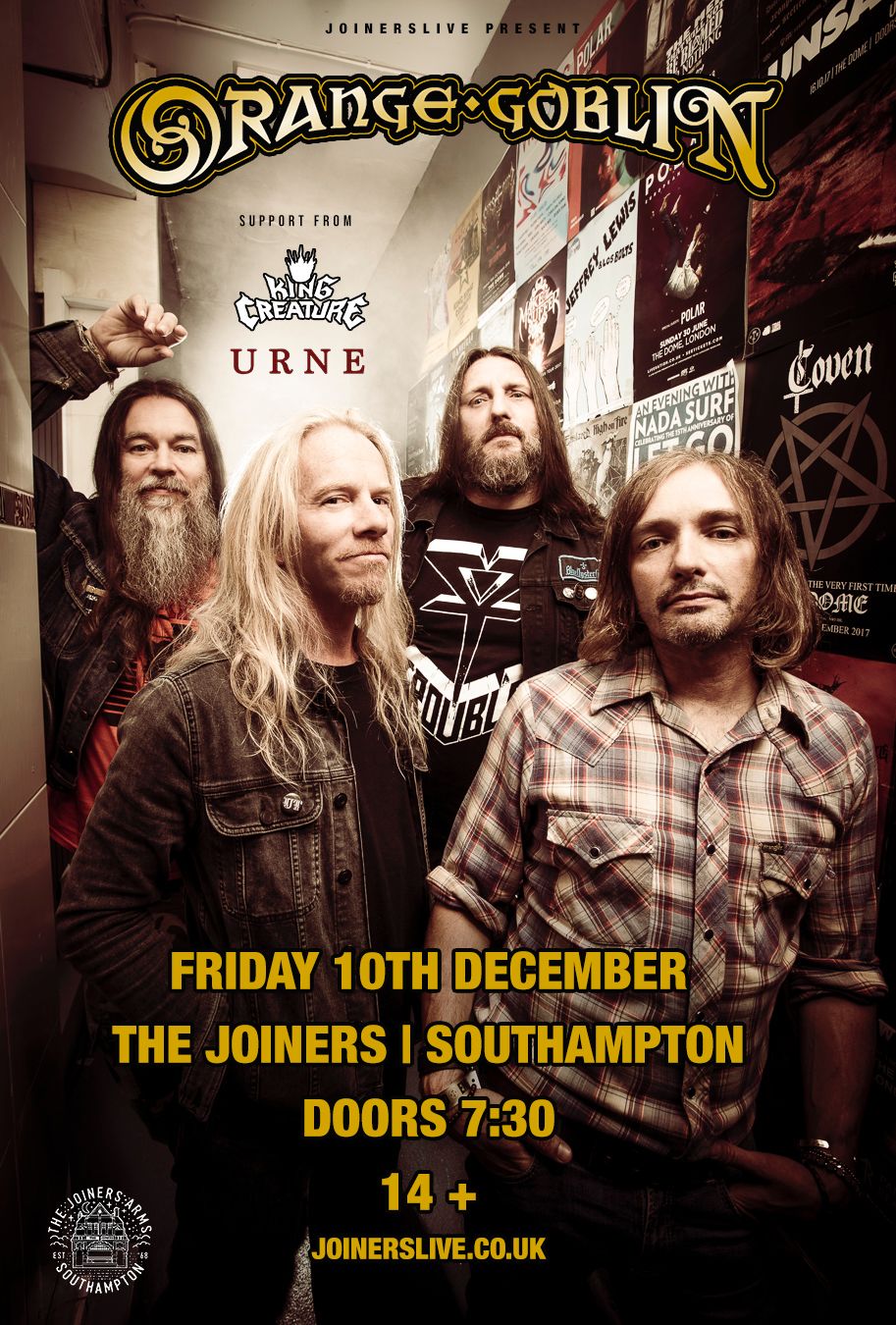 Longevity is everything in the world of heavy metal. As Sabbath, Priest and Maiden have demonstrated over the decades, bands that stay the course, remain true to their principles and keep delivering the bombastic goods will always earn the respect and love of their fans and peers. Following in the footsteps of those epoch-shattering giants was never going to be easy, but one band have undeniably earned the right to be regarded as British metal legends, cut from the same beer-stained cloth as the greats:, it can only be Orange fucking Goblin, baby!

Originally formed under the name Our Haunted Kingdom, way back in 1995, Orange Goblin entered the world of heavy music as wide-eyed enthusiasts, eager to channel the fire and fury of their heroes. Emerging amid the exhilarating melee of the mid-‘90s stoner rock and doom explosion, the Londoners immediately endeared themselves to a generation of metal fans by simply going for it at full, beer-swilling pelt.

“To be honest, we didn’t really have any ambitions back then!” laughs frontman Ben Ward. “Not beyond recording a few songs for a demo and then maybe playing a few local shows with some bands we were friends with. It all just snowballed in a really short space of time due to the growing scene in the UK around 1994/1995. We were all a bit taken by surprise and it wasn’t until a few years later that we realised that a bit of professionalism could’ve really helped us in those early days!”

Orange Goblin’s debut album Frequencies From Planet Ten was released via esteemed underground imprint Rise Above Records in October 1997. From that moment on, the band’s rise to prominence was slow but steady; their rabid dedication to playing live and always rocking people to within an inch of their lives earned them a formidable reputation and numerous opportunities to tour the world. A steady stream of critically acclaimed and widely revered studio albums has also added to Orange Goblin’s substantial legacy, from early classics like Time Travelling Blues and The Big Black through to more recent triumphs like 2012’s universally praised A Eulogy For The Damned and last year’s equally hailed The Wolf Bites Back. As they approach a quarter of a century of active service, Ben is understandably chuffed about the band’s achievements.

“I’d have to say that we’re particularly proud that we’ve recorded nine studio albums that are all held in high regards by people that matter to us,” he states. “Also, touring the world and seeing places like the USA, Canada, Russia, Australia and Japan, doing shows and tours with Alice Cooper, Heaven & Hell, Queens of the Stone Age, Down and Clutch and then sharing festival stages with Slayer, Danzig and loads more. Being asked to play the mainstage at Ozzfest in California with Ozzy Osbourne in 2017 was a personal highlight. The fact that we are still here and no one has died is quite a triumph in itself!”

Although impervious to changing trends and unwavering in their devotion to heavy metal at its thunderous, purest best, Orange Goblin have never released the same album twice. Instead, the band have constantly tinkered with their irresistible formula, resulting in a catalogue of music that covers everything from primitive, Sabbathian stoner metal and skull-rattling Motörhead worship through to scabrous, Frost-fuelled doom and sun--scorched southern rock. Beyond that versatility, it’s the sheer passion and heft that Orange Goblin invest into every fresh detour that has made their journey from Frequencies… to The Wolf Bites Back such a rich and rewarding experience for band and fans alike.

“On our first album you can hear that we were young and very excited to be given the opportunity to use a proper recording studio,” Ben notes. “But throughout our career, I’d like to think you can recognise the natural progression in our sound and our songwriting. Time Travelling Blues stands out as an album that really announced our arrival on the global scene and elevated us from an underground band to a band that were featured regularly in the mainstream UK rock press. The Big Black backed that up, I think, but then it wasn’t until A Eulogy For The Damned that we saw another big shift in popularity and respect for the band. Suddenly we were considered one of the old guard and started getting our faces on magazine covers, which was nice!”

Nobody survives 25 years in the music business without experiencing a few lows to counterbalance the highs. Orange Goblin are no different, of course, but while Ben and his comrades – guitarist Joe Hoare, bassist Martyn Millard and drummer Chris Turner – have negotiated plenty of obstacles along the way, a straightforward and unpretentious attitude has enabled them to weather every storm.

“There have been a few tough moments along the way, but not too many,” shrugs Ben. “Maybe that explains our longevity. When Pete (O’ Malley, OG guitarist between 1995 and 2002) left the band, we thought about calling it a day but we battled on. We’ve had ups and down with labels and we’ve occasionally felt that people could’ve done more to help us, but we’ve never looked for a handout and always done things ourselves. That’s something we’re all fiercely proud of.”

Heavy metal heroes, DIY daredevils, masters of the riff and the UK’s greatest rock’n’roll party band, Orange Goblin have reached their 25th anniversary with reputation intact and more wind than ever billowing in their denim ‘n’ leather sails. Most importantly, the band’s shared camaraderie and mutual respect for one another seems to have grown alongside their reputation as musicians and artists.

“We actually do still like each other!” chuckles Ben. “We obviously argue and disagree occasionally but there has always been a mutual respect in the band and we all appreciate what each other do for the band. We’ve never taken ourselves too seriously and always maintained a sense of humour, which you need in the music business! We’ve never acted like rock stars and are very approachable and I think people have always liked that about us, too.”

When Orange Goblin reach the grand landmark of their 25th anniversary, the celebrations will doubtless be loud, drunk and messy. But as the band’s legions of acolytes will attest, this band have long been the living, breathing, sweating and bleeding embodiment of heavy metal’s ageless spirit and their entire career has felt like one big, riff-driven celebration. And it’s clearly a celebration that Ben, Joe, Martyn and Chris fully intend to continue long into the future. Here’s to the next 50 years, baby!

“I think wed’ still like to do one last big tour with the likes of Maiden, Priest, Saxon or Metallica but other than that we are all very happy with what we have,” Ben concludes. “We’ve played all the big festivals, we’ve supported and toured with our heroes and we’ve been held in high regards by people that we respect and look up to. Most importantly, we’ve always had fun doing it!”