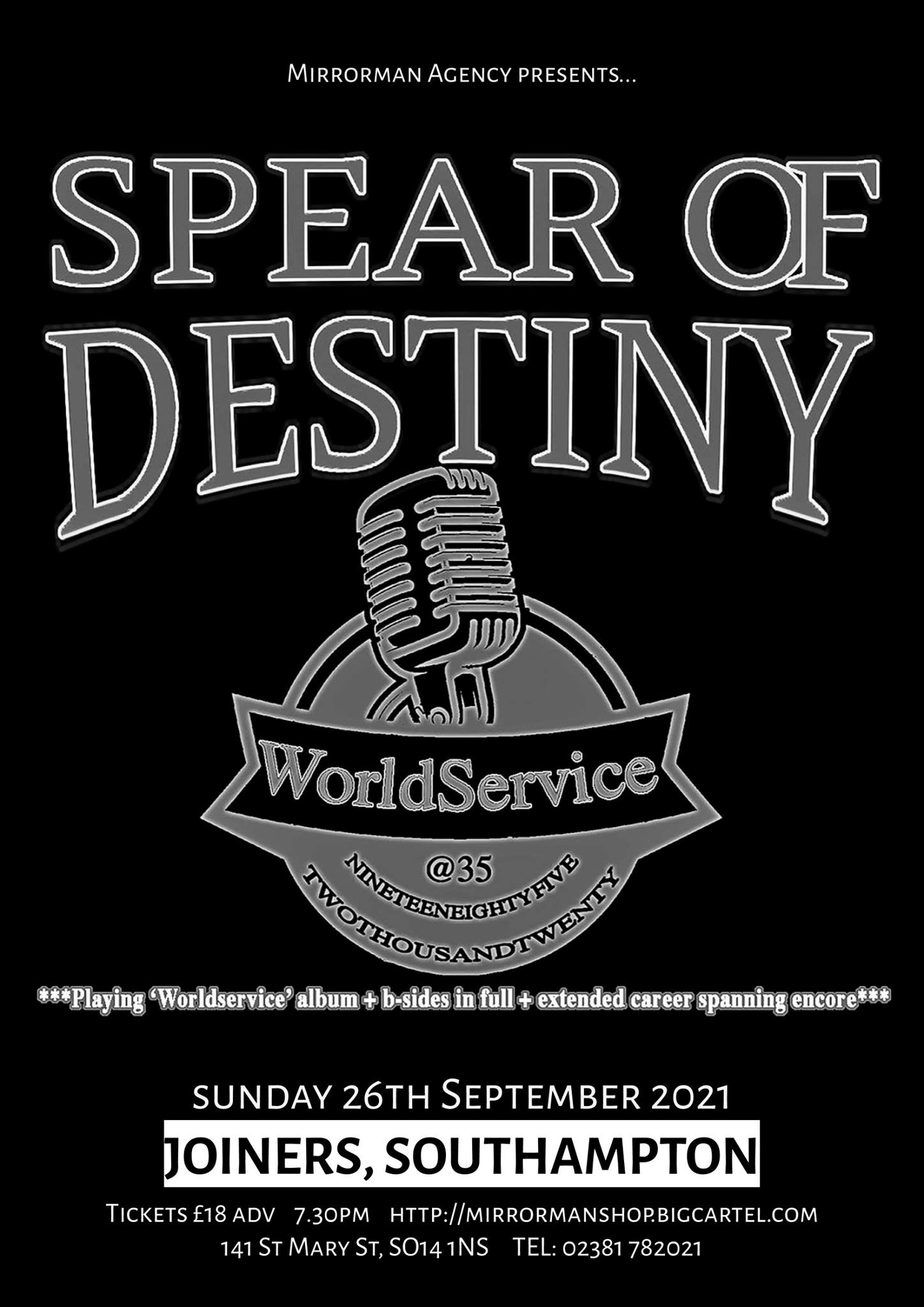 Spear Of Destiny are at Joiners on Sunday 26th September 2021 celebrating the 35 years of the band's best known LP - Worldservice.
Tickets are on sale: https://mirrormanshop.bigcartel.com/
Hard to believe we know but it is true, Kirk Brandon has now been leading SPEAR OF DESTINY for over 37 years.
SPEAR OF DESTINY were formed in 1983 after the demise of Kirk Brandon’s post punk iconic rockers Theatre Of Hate. (Brandon had also, before TOH, been the main man in every punk rockers favourite band of that era The Pack)
The current line up of Spear is the longest serving to date and features Adrian Portas (New Model Army / Sex Gang Children), Craig Adams (Sisters of Mercy / The Cult / The Mission) and Phil Martini (Jim Jones and the Righteous Mind) on drums. Long time Brandon cohort Steve Allan-Jones will be covering the keyboards. During 2019 the line up was boasted by Saxofanist Clive Osborne who will be staying in the line up for 2020.
On April 6th 2018 SPEAR OF DESTINY released their 14th studio album “Tontine” The album was been fully funded from a private fan pre-sale. The album is officially released for Brandon's own Eastersnow Recording Company label imprint and is available on CD, Vinyl and Download across Europe. US label Cleopatra Records will be handling the North American release.
The current live show pulls on songs from all 37+ years of SOD. The classic’s Liberator, Mickey, Rainmaker, The Wheel, Never Take Me Alive etc… are all found sitting closely alongside newer fan favourites such as Pskotik, Age of Unreason, Lucky Man & Mr Livingston!’.
As 2020 is the 35 anniversary of the band's best known long player “Worldservice” live shows throughout this year will most certainly feature a good smattering of WS tracks for good measure.
Comments on Kirk Brandon and Spear of Destiny:
The BBC’s Jeremy Vine says, “@kirkbrandon is one of our greatest musical geniuses”
John Robb’s Louder Than War “Spear of Destiny are criminally underrated and are one of Britain’s best, Boys Own, punch the air, grandiose Rock’nRoll bands.
Mojo wrote: “Kirk Brandon is on of the UK’s best kept secrets”.
On SOD's previous studio album ‘31’(Thirty-One).
BBC Radio’s Jools Holland: “possibly [Spear of Destiny’s] best album in 20 years”
Louder Than War: 9/10 Brandon puts his all into every song with epic bombast, coming across as a tragic rock n roll anti-hero. He is the Wagner of rock n roll. And the haircut’s still pretty cool.
Aberdeen Voice: Thirty years together makes for flawless instrumentals, a unique sound, and some remarkable riffs and harmonies.
http://www.kirkbrandon.com